Socialite Deanna Bell, daughter of wealthy industrialist Austin Bell of Bell Industries, always had a dark side, though she hid it very well. That dark side came out, however, after she was kidnapped by the Trolls and ransomed in exchange for experimental nanites one of her father’s companies was working to develop. However, the Trolls betrayed Bell, escaping with both the nanites and Deanna. Seizing the opportunity, Deanna grabbed the nanites and quickly injected herself. One moment she was just a regular woman; the next, she could poison her foes and control the forces of darkness itself to strike down her enemies. She killed all six of the Trolls who had kidnapped her before escaping. Disgusted by what she had done, Deanna vowed to dedicate her life to defending Atlas Park. Donning a costume and dubbing herself Ms. Belladonna, she uses her power to keep citizens safe from the Trolls and all other villains who might seek to do them harm. 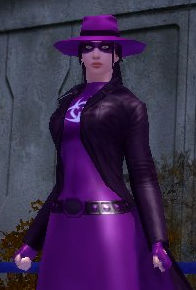