Nicholas Carter was a decorated PPD vet when he was asked to volunteer for the Powers division by Neuron himself. Fusing a bio-engineered (and previously untested) living metal into his skeleton, Carter was given super strength and near-invulnerability, but at a price: an error in the bonding process left him without the use of his hands and feet, rendering him all but useless for the program. Abandoned by Neuron and left to die in the sewers of New Pratoria, Carter was found and nursed back to health by Tunnel Rat. At Carter’s insistence, Resistance scientists amputated his hands and feet, replacing them with cybernetically-enhanced prosthetics. Carter, renaming himself Experiment 45 after his Powers Division designation, now fights on the side of the Resistance having experienced first-hand the disregard that Neuron and Emperor Cole hold for the citizens of Praetoria. (895/1023) 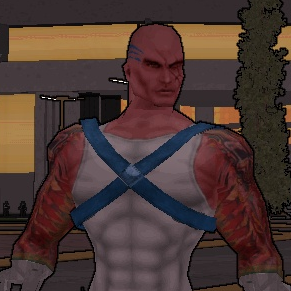