A genius child prodigy, Henry McGee entered college at age 13, quickly earning double masters degrees in physics and engineering. He was on his way to a Nobel prize when Paul, his underachieving little brother, was arrested for auto theft. Embarrassed, McGee ignored the situation, but as his career grew so did Paul’s. Eventually, Paul was arrested for armed assault, and McGee, remorseful, finally took notice. Wealthy from his inventions, he easily paid the bail to get his brother out of jail pending trial. On the way to the car, McGee passed his cell phone to his brother to make a call. Just then, a car backfired. Startled by the noise, mistaking the cell phone for a weapon, a rookie Paragon cop immediately shot Paul dead. Enraged, McGee rushed the officer, who shot him in the spine. His legs paralyzed, he perfected a suit of armor to give himself mobility. Renaming himself Dr. Smash, McGee has dedicated his life to taking revenge on the Paragon Police in honor of his brother. (1013/1023 characters) 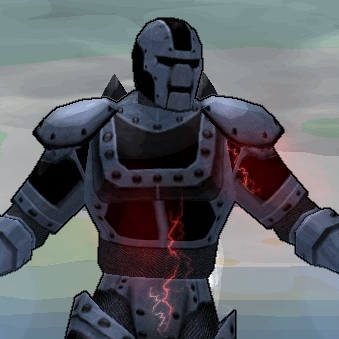