Born into a family of criminals, Jane Frazetta felt trapped in the life she’d inherited. One day, working as a henchwomen for Cap’n Jack Fury, Jane and two of her cousins helped the ghost pirate rob Sharkhead Isle National Bank. Cerulean Shadow showed up just as they were running out the door, but Fury was ready for him and quickly got the upper hand. Just as the dastardly pirate was about to land the killing blow, Jane made a split-second decision and pushed Cerulean Shadow out of the way. The pirate’s sword went through her chest, killing her instantly. She awoke in hell, prepared to pay for her sins. Cerulean Shadow, however, pled her case with his father, the high demon Azazel, and got her a reprieve. She would be given the powers of hellfire and a handful of demons to do her bidding. In return, she must save 10,000 innocent souls. Only then will she get her life back. In the meantime, Jane spends her days and nights patrolling Paragon City, stopping evildoers, and having the time of her afterlife. (1023/1023 characters) 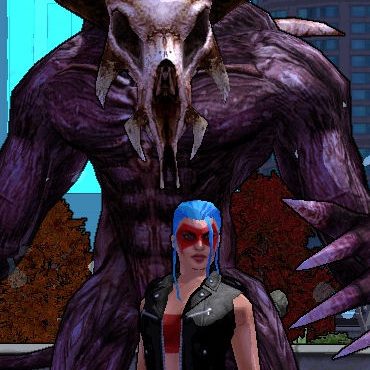