An ancient demonic prophecy spoke of a man born of a human mother and a demon father who would bring the world down in flames. Thirty years ago, in an attempt to fulfill the prophecy, the high demon Azazel, masquerading as a human, seduced and impregnated young virgin and high school Sophomore Jenny Locke. After the deed was done, he took her memories of the encounter, leaving the bewildered and confused teenager to explain to her parents how exactly she had gotten pregnant despite her insistence that she’d never even been with a boy. The event forever created a rift between her and her parents, worsened by her decision to drop out of school to raise her child.

She gave birth in a small hospital in rural Illinois, to a bouncing baby boy she named Spenser. She instantly bonded to her baby, falling in love with the curiously blue-tinged bundle of joy upon sight, but Azazel wasn’t quite finished with her.

Less than twenty-four hours after his birth, Azazel once again entered Jenny’s life, this time in full demon form, and ripped the screaming baby from his terrified mother’s arms.

Azazel gave the child to the Circle of Thorns, an organization intent upon making hell on Earth a reality, entrusting the devil-worshipers to raise Spenser and teach him the ways of evil. And, for a while, that’s exactly what they did. But Monica Dominguez, an undercover agent with The Hollows police department who had infiltrated the group, discovered the plot and, using records from the Circle of Thorns own files, revealed to Spenser his origin and his father’s plans for him.

Unaware of his demon origins, (the Circle of Thorns told him his blue skin and supernatural powers came from experimental drugs Jenny had ingested while being pregnant with him) Spenser had been told that his mother had been a drug-using prostitute and had abandoned him after trying to sell him to the Trolls, a rival crime organization in The Hollows. Oh, how he had hated her, and how that loathing had served to corrupt his soul! He was well on his way to becoming the being of pure anger and hatred that his father so desperately wanted him to be when Dominguez, risking her cover and most surely her life, told him the true story of his birth and his father’s plans for him.

Dominguez was killed in an attempt to help Spenser escape the Circle of Thorns, but escape he did–taking down thirty druids in the process. Mourning the death of the undercover agent who had given her life to give him his freedom, he decided the best way to honor her was to find his mother, reconnect with her, and live out the rest of his days in peace, making sure Azazel’s horrific prophecy never came to fruition.

But it was not to be. Young Jenny Locke, confused and despondent after the demon stole her baby, killed herself, ironically overdosing on the antidepressants her doctor has prescribed for her to deal with her depression after having had her child so violently taken from her.

Mourning the mother he never knew, Spenser decided that it wasn’t enough to avoid the prophecy; instead of simply not being a force for evil, he knew that he must meet it head on and instead become a force for good. He would spend every waking moment working to ensure that Jenny Locke and Monica Dominguez had not died in vain.

Donning a costume and calling himself Cerulean Shadow (after his blue-tinged skin and what he learned later had been his mother’s favorite color) Spenser entered Paragon City and dedicated his life to saving innocent souls instead of damning them, thus hopefully ensuring that his father’s hateful prophecy never came to pass. Struggling every day with his demonic origins and the anger and resentment that nips as his soul, the newly-christened Cerulean Shadow spends his days and nights patrolling Paragon City, fighting the good fight and keeping the streets safe from those who would seek to harm or control innocents. 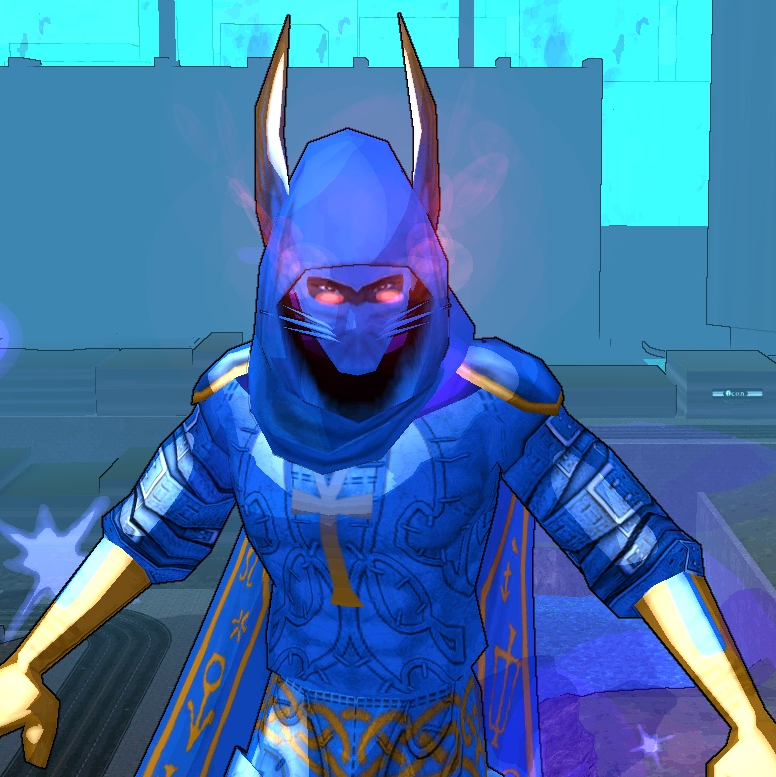