17-year-old high school honor student Alicia Jordan was on a date when her mutant powers manifested. One moment she was making out with Jeff Wu; the next he was ashes. She was arrested and charged with murder but burned down the jail and escaped before the trial. Afraid to go home, she turned to crime to support herself. But when her sister Cassie’s mutant fire powers manifested and she began to follow in her footsteps, Alicia knew she had to make a choice. Putting villainy behind her, she moved to Paragon City and, with her sister, began fighting crime. One year later, tired of hiding, they surrendered themselves to the authorities. Statesman surprised them by showing up as a character witness. Both girls initial crimes were ruled accidents, and the Jordan sisters were given full pardons. Now they patrol the skies of Paragon as full-fledged heroes, keeping the city safe for everyone. (899/1023 characters) 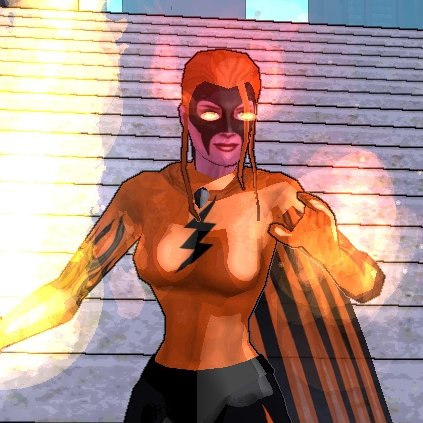