Jane Okayama, 19-year-old martial arts prodigy and holder of black belts in multiple disciplines, was attending a Jiu-Jitsu competition in Atlas Park when everything went wrong. Papers the next day told a story of super villain Dr. Smash and legendary hero Gentleman Gladiator’s brawl that took out three city blocks, including the Paragon Arena where the competition took place. Twelve people were killed, including Jane’s parents. She awoke in Smash’s laboratory, paralyzed and with no memory of the accident. Using an experimental serum, he gave her the ability to heal almost instantaneously and to move at super human speed. As she recuperated, Dr. Smash fell in love with Jane, and finally revealed the truth; he had caused her family’s death. Heartbroken, Jane fled Smash’s lair. Donning a costume, she renamed herself Fist of Chains, for, like her heart, her fists were now cold and hard, and she would do whatever necessary to bring her benefactor and others like him to justice. (1023/1023 characters) 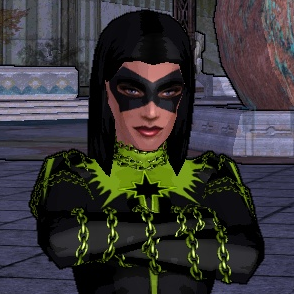