The daughter of the French ambassador to the United States, Monica Rousseau was kidnapped and her family slaughtered at the age of eight. Found three years later walking the streets of St. Martial, Monica could not remember anything from the past thirty-six months. Because she had no living relatives, she was put into the foster care system. At age fifteen, her foster father tried to rape her, but both he and Monica were amazed when she shot ice daggers from her fingertips into his chest, killing him instantly. Distrustful of the country that had allowed her parents to be murdered and had handed her over to a rapist, she took the name Bleu Blizzard (as a nod to her French heritage,) using her mutant powers to provide for herself and hunt for her parent’s killers. (781/1023 characters) 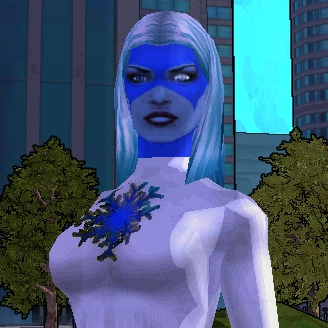