Created from the DNA of five of the top Arachnos warriors, designate ALX47 (dubbed Alex by his handlers) was never supposed to know he was a hybrid clone. On his 23rd birthday, however, just as he had finished training to lead a mission against Longbow, an errant e-mail meant for his primary handler alerted him to that fact that everything he had been told about his history was a lie. Confused and enraged, he slew his handler and escaped the Arachnos lair. Now he calls himself G.I. Faux – the fake soldier – aka â€œThe Great American Zeroâ€ – and fights against Arachnos instead of for them. But he has no illusions about himself; he was born from evil and bred for destruction. Longbow, Circle of Thorns, The Family; he doesnâ€™t care. G.I. Faux is his name and getting the power to eventually bring Arachnos down once and for all is his game, and he plays it very well. Goooooo Faux! (892/1023 characters) 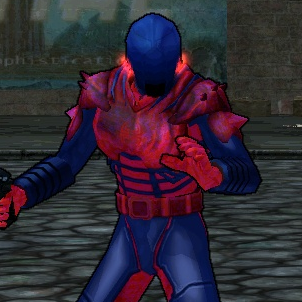