Pulled from an alternate universe in an attempt to bring Cap’n Jack Fury forward in time, the Crey mistakenly captured Cap’n Jack Fearsome instead. That mistake cost them three million dollars worth of lab equipment, lives of 10 Crey scientists, and 60 Crey guards. Fearsome hates the Crey and has devoted his life on this alternate Earth to destroying them, teaming up with Cap’n Jack Furry and even Cap’n Jack Fury himself (their next attempt, after three failed tries, was finally successful) to raid Crey labs in attempts to find the technology necessary to reach their respective worlds. A bloodthirsty warrior in his own reality, Fearsome is a giant of a man in this one, and is not above using his superior size and skills to get whatever he wants as he fights to find his way home. (801/1023 characters) 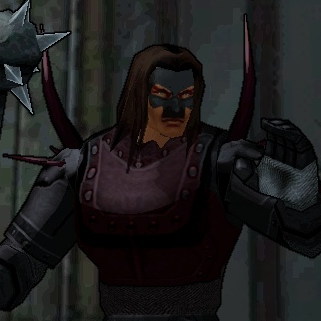