Cap’n Jackie Furious ruled an alternate universe version of the Rogue Isles with an iron fist until she was accidentally brought to our universe as a result of a failed attempt by the Crey to capture her counterpart, Cap’n Jack Fury. Using her formidable skills, she quickly dispatched of the Crey scientists, then brought them back to life to fight by her side as zombies. Furious has formed a strange kinship with the Cap’n Jacks from various other universes, teaming together from time to time to take on the Crey in an attempt to further her goal of taking over this version of the Rogue Isles and eventually finding her way back to her universe to unite the two kingdoms. (682/1023 characters) 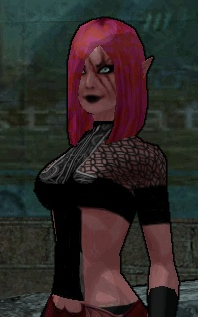